Careers in Security with Latiyfah Mustafa 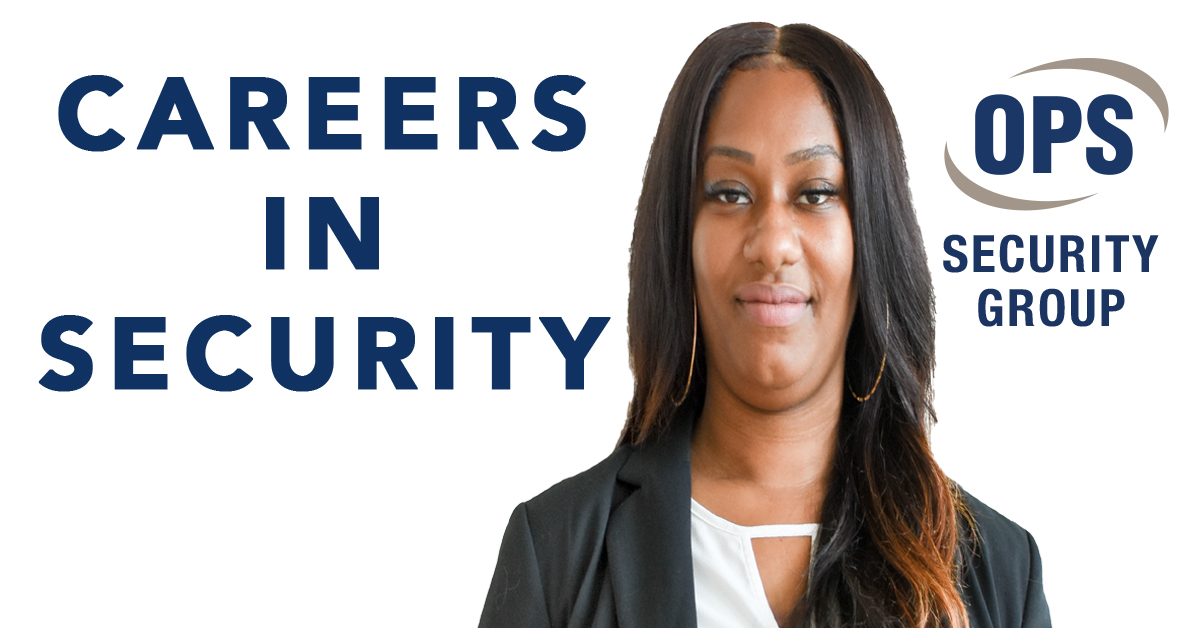 Latiyfah Mustafa is the recruiting specialist for OPS Security Group. She started with the company in 2014 as a concierge and worked her way up to being an officer in charge (OIC), before joining the human resources team. Born and raised in Philadelphia, Latiyfah has worked in multiple front desk positions, including as a residential counselor at a homeless shelter.

Latiyfah manages all of OPS Security Group’s hiring and recruiting initiatives. She screens resumes, applications and conducts initial pre-screening tasks. She looks for candidates with a security background, plus a customer service mindset. Latiyfah is currently working on completing her Bachelor’s degree at the Community College of Philadelphia.

What drew you to working with OPS? Did you originally think you would work here long term?

LM: I definitely didn’t think I’d be working long-term. At the time I started working I was a stay-at-home mom. I had an eight-month-old at home but I wanted something to fill out my days. I honestly didn’t think I’d be here as long as I have been, but everyone was so helpful to me when I started. I was a newly single parent with an infant and two children at home.

I started out working in the field as a concierge. I’ve worked every shift imaginable from overnights to filling in at all different hours.

You’ve been with OPS for six years, what has kept you here so long?

LM: It has everything to do with how people treated me. With Mitch, in particular, I felt like he really cared about me as a person. And I think that’s true for the whole company — they care about the people that work for them.

There was a time I worked the night shift and had an eight-month-old at home. Between the two I was really tired and not present during one of my shifts. Instead of immediately firing me, Mitch sat me down and asked about what was going on in my life. He has a mentality of “how can I help you help yourself?” He shared some tips about time management and creating routines and the issue was resolved.

Now I think about that when I manage people. If someone’s clothes aren’t together or they’re late, I’m going to assume that maybe something beyond their control is going on. I’ll ask them directly, and usually, a solution can be worked out.

There was another time when my shift meant I was spending too much time away from my teenage daughter. I felt like everyone was raising my kids except me. I decided to get up the courage to contact Mitch. I sent him an email when my shift started and he wrote back immediately. “You get off at 7:00am?” he asked. “I’ll be there at 6:30.”

And he was. We met, we discussed other shifts and that’s how I landed a management role.

What qualities do you look for in people you are recruiting in the field?

LM: I really care about what I do. I really like to do what I do. I’ve made friends in buildings that I would never be friends with otherwise. One person I met even represented me in a legal case. I’ve watched children grow up and become a part of people’s families. It’s an awesome feeling.

This line of work is mostly customer service. I really look for people that enjoy their work as much as I do.

You have to be able to relate to people about anything and everything.

For instance, I had a couple I met at one of my sites who recently moved from Wisconsin. They didn’t know anyone and the husband was working long hours on his residency at Jefferson. I started interacting with the mom and daughter daily. Eventually, the daughter would come down stairs and sit next to me as she watched Moana or Frozen. Every.single.day. One day, an executive from the property management company was touring the site. I’d already promised the girl we were going to have a tea party. I wasn’t going to cancel on her. The executive saw what was going on and asked why he didn’t get an invite. He sat down and the three of us had a tea party.

I take a lot of pride in knowing I can make people’s days better. I learn everyone’s name, remember small details about their life and they really appreciate it. It warms my heart knowing I can make a person smile before they head out to start their day or when they return home from a rough day. You see people at their highs and lows in this line of work. So much of it is about dealing directly with the tenants or residents at your building, even more so than the property managers in most cases. You have to be willing to personally invest in those relationships. I’ve walked people’s dogs. If someone were stuck in the elevator, I’m the person who is literally there trying to pry the door open for them. I’m very hands on for residents and will do anything I can to help them. People have cried and left gifts for me at every site I moved on from.

When I recruit, I like to sit down and just talk to someone for the first part of the interview. If I can get a sense of who they are as a person and how they relate to others, it tells me loads about how they’ll do in a concierge role.

Where do you see yourself going with OPS in the future?

LM: I want to be the head of recruiting. I project OPS is going to do nothing but grow. I want to be in a position where I am overseeing the recruitment department and helping other people grow under me.